The store will not work correctly in the case when cookies are disabled.
English
GUNSAILS 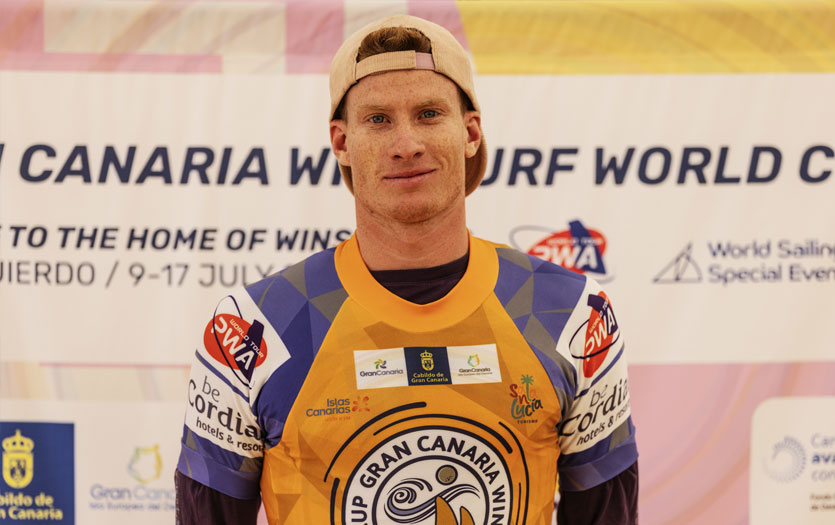 The PWA World Cup in Gran Canaria has always been a consistent provider of wind, waves and lots of windsurfing action in the last years. After the "Corona break", this year for the first time it looks like a rather shaky wind forecast. The event starts, as always, on the first day with the registration. During this compulsory task all riders already had to sweat a lot. Due to the current weather conditions there were already temperatures around 30 degrees Celsius in the morning. It is noticeable that on Gran Canaris always a lot of young talents take part in the competition. So also this year the tent is full at the registration and the atmosphere, despite the wind forecast, as usual in Spain, loud and very familiar. In the tent the first photos were taken and outside on the beach already first interviews were conducted. 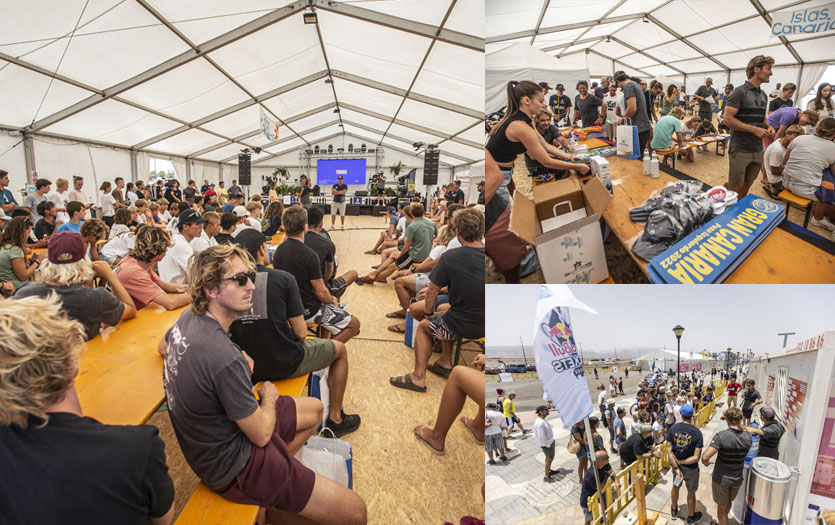 The 2nd and 3rd day were the days of waiting for me. The juinor competitions were held first in the prevailing conditions. It is amazing how the level here is also getting better from year to year, especially the riders living here used their home advantage and delivered an impressive performance to the spectators. During this time I tried to be as little as possible in the direct sun and on the beach and fill the days sensibly with stretching and a light fitness program. 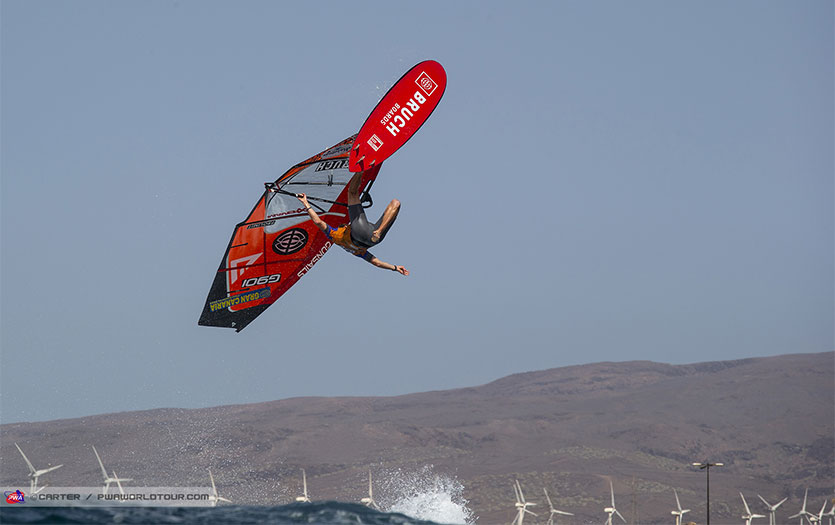 Today the women's field was challenged first. After exciting heats, the Moreno Twins again used their home advantage and made it to the final, which Iballa won. For the men's field this meant another day to wait and see. In the afternoon the hoped-for start of the main field took place. Because I was seeded in the 2nd round due to my good starting position, I had to wait for the 1st round and then also the first heats of the 2nd round. When I was finally on the water in the evening, the heat was not started because of the decreasing conditions and the missing waves. So I had to take my competition tension with me into the evening and compensate it as best as possible for the next day. One of the daily tasks in Pozo is always to secure the equipment on the beach, often the abundant stone must help out additionally. 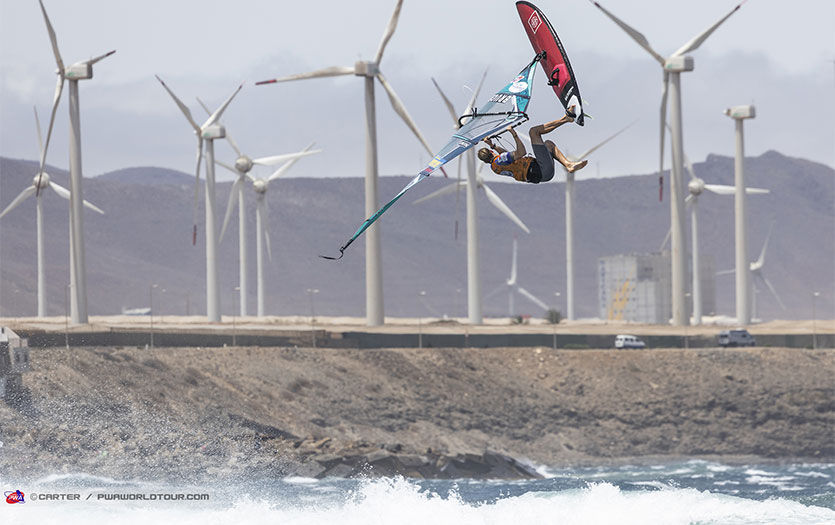 Unexpectedly the forecast improved and the main field was started. My heat against Takuma Ishii was now right at the beginning of the heats and I had to follow very closely the events and the announcements of the competition management in order to have everything ready in time and above all to be concentrated at the start myself. When it finally started I decided after some short test runs for the combination Bruch-Board Madness (88 L) and the Seal 4,7. For the prevailing conditions, the choice of material was 100% suitable. With a backloop and a push loop as well as two solid wave rides I was able to win the heat and move on to the next round. The backloop (one-footed & one-handed) was scored with 7.0 points and is so far the highest score for this jump in the competition. 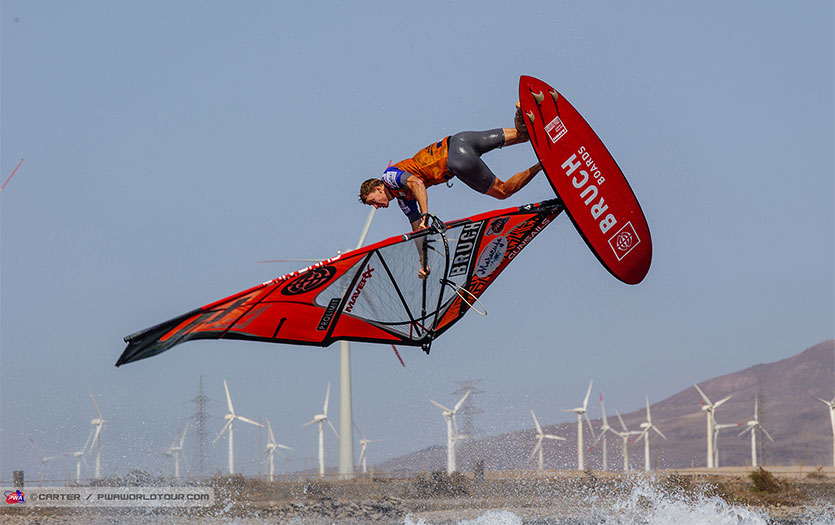 Today I had my eighth final heat against Marc Paré. Marc is not only an outstanding rider on the tour but also one of my very good friends. So a heat against him is always a double challenge. During the warm-up the conditions were very good again for the Seal 4,7 and the 88 l board. A short wind hole at the beginning of the heat, in which 2 jumps and only 1 wave were counted and overall the heat duration was also limited to a relatively short 14 min, however, expanded to a clearly decreasing base wind. Unfortunately I changed the board (to a 95 L Happy) too late to collect the necessary points. Marc, meanwhile, rode a very solid heat with suitable material from the beginning and thus deservedly moved on to the next round. For me, unfortunately, this meant the end in the Single-Elemination. 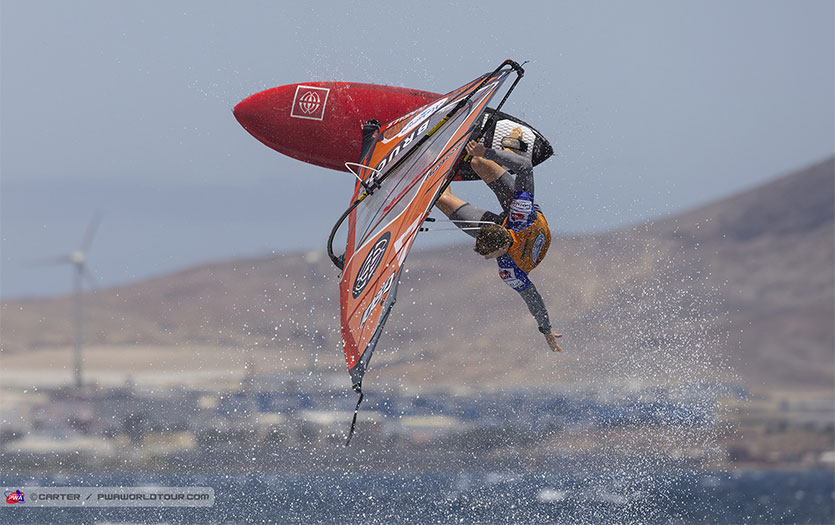 Also today the conditions were better than expected. Pozo surprised us again and again with good conditions during the last days. Until the final all heats could be run. Almost all riders followed the exciting heats directly on the beach. Also for me these heats are always very interesting, because both in the preparation of the heats and especially in the tactics during the heats you can always see interesting details. Unfortunately, the final could not be held due to weakening waves. For tomorrow, both the final in the main field and directly afterwards the start of the Double-Elemination is planned. 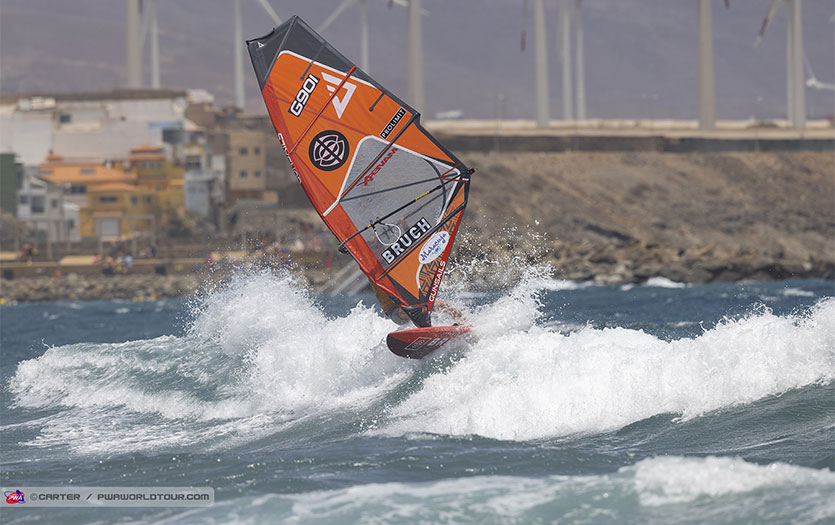 This morning there were quite stable wind conditions but the waves were rather small at first. The final was started with some delay around noon. According to the announcement the double elemination should be started immediately afterwards, so I was already a bit anxious, after all I wanted to improve my position again in the 2nd round. After the draw was announced, this seemed quite feasible to me. However, first the youth finals were run and then the doubles were started. However, I was not seeded until the 3rd round, so I could not race that day. 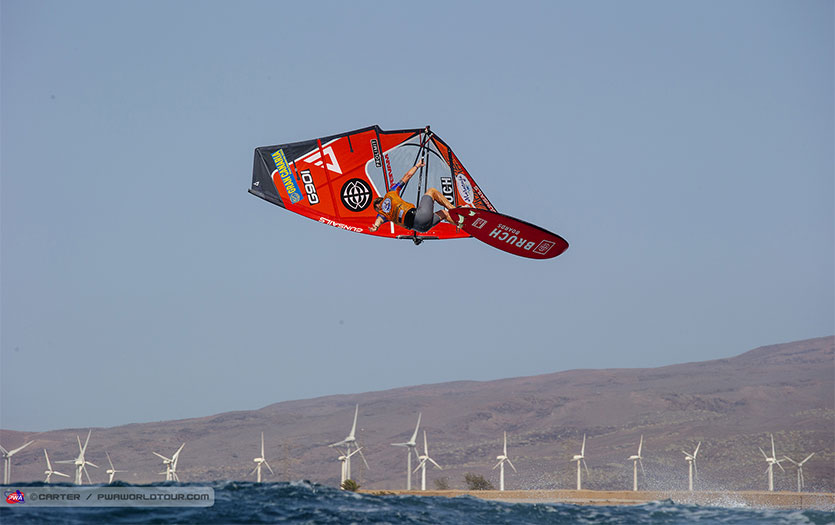 Today the double was continued and I could finally get back on the water. Against Antoine Martin I had an expected difficult first opponent, but I was able to win by a narrow margin. All jumps worked well and with 4,2 I had chosen the right sail size. In the next round, I faced Dieter van der Eyken. We shared the apartment in Pozo and often train together on Tenerife. This heat was also close, but with a score of 7 for my first wave, I was able to gain a lead in points which ultimately meant victory. My 3rd heat was against Liam Dunkerbeck, who lives and trains here. So everything had to be right for me to win this heat as well. However, the wind increased again in the heat and I had too much power with the already somewhat larger sail choice, I had decided again for 4.2 to stand the jumps and maneuvers safely. In the only short 12 heat minutes I could not compensate this and lost this heat. In the end this means for me the 9th place in the ranking for this event. Due to the rather small waves during the whole competition I couldn't use my strengths in wave riding to 100%, so I am satisfied with the result, although I would have liked to win some more heats in the double.

See you next time, your Julian 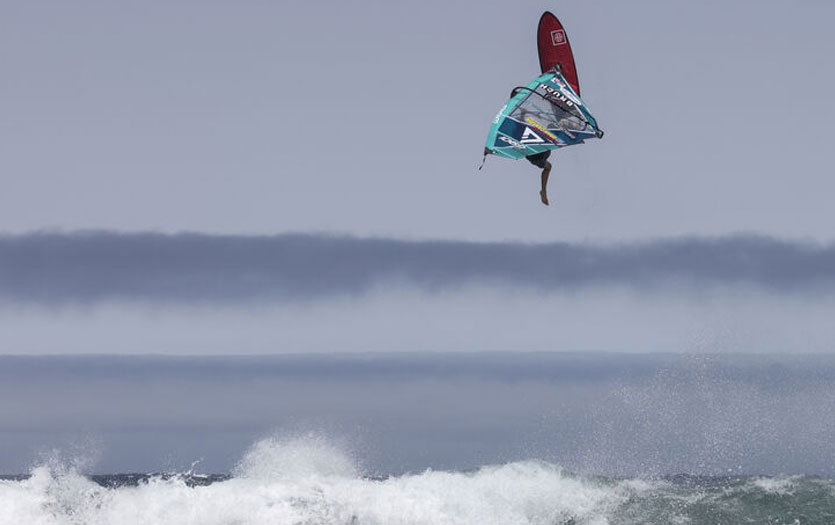